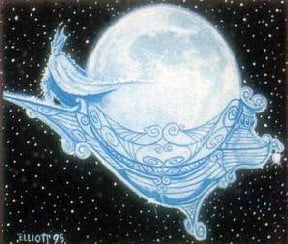 After the Darkening of Valinor and the destruction of the Two Trees, Telperion, the White Tree, bore one last Flower of Silver before its end. According to the lore of the Elder Days, Aulë and his people made a vessel to carry to the silver flower aloft, and Tilion, one of the hunters of Oromë, was granted the task of steering the new Moon through the sky.[1]

Tilion guided his charge up into the western skies just as Fingolfin entered Middle-earth, and so marked the beginning the First Age. After seven lunar "days", the Sun, also rose. The Moon first rose above Valinor in the far West of the World, but Varda came to change this arrangement, so that the Moon would pass beneath the World, and arise in the east instead, as it does to this day. [1]

This notion was carried over to Gondor, where the sons of Elendil each had either of the lights in his name: Isildur and Anárion, and with them their cities Minas Ithil and Minas Anor, and the lands that lay about them, Ithilien and Anórien.[5] 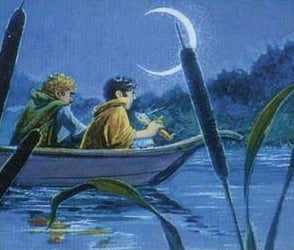 The phases of the Moon were explained that: first, like the earlier Silpion, the Rose needed to be watered with its shining dew and created it in greater quantities, and the heavy dew had to be removed; second, the Moon had to stay within the lower layers of Ilwë and the winds made it wobble.[22]

Silmo wanted to steer the Moon but could not do it, so Manwë appointed Ilinsor, who was joined by other air spirits. The Man in the Moon is described in those writings as being an old Elf who secretly hid on the island of the Moon, and built his minaret there.[22] This is alluded to further in Tolkien's Roverandom, where the Man in the Moon also lives in a Minaret. 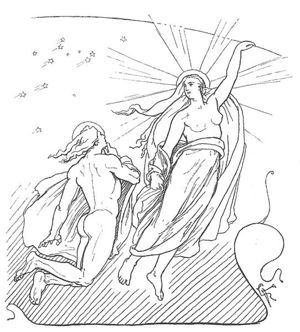 The gender of the celestial deity is mirrored also in the gender of the noun for "Moon" in these languages (eg. French la Lune but German der Mond). This was also perhaps the case with some of the languages of Arda (Ghân-buri-ghân refers to the Sun as a woman).

"...my moons in the crucial days between Frodo's flight and the present situation (arrival at Minas Morghul) were doing impossible things, rising in one pan of the country and setting simultaneously in another."
― J.R.R. Tolkien's letter to Christopher Tolkien, 24 April 1944[26]

Tolkien was very careful in the moon phases described in his works, so that they fit the passing of days realistically. Tolkien was remodelling the phases while reviewing the book in 1944 so that he preserves the consistency. The moon phases described in the Lord of the Rings correspond to the phases of years 1941-2 and it is probable that he used a recent calendar for reference.[27] Unfortunately, some minor errors (that can be detected only after thorough measurement and astronomical knowledge) slipped his attention (for example cf. September 22)

The moon appears in the background of various scenes. In a notable animation error, it is visible behind both Frodo and Boromir when the latter tries to persuade Frodo to give the Ring at Amon Hen.[28]

The Moon - or rather, an image of the near side of the moon in the plenilune - is used as a backdrop for scenes playing at night, and appears recognizably in the sky in cut scenes. It appears behind Strider as he finds Merry in the streets of Bree,[29] behind the Watcher in the Water, [30] and behind the fell beast in the final cut scene.[31]

The moon is an important location in Tolkien's children's story Roverandom. After being turned into a toy dog, the wizard Psamathos Psamathides summons his postman Mew (a seagull) to take Rover to the moon to see the Man-in-the-Moon.[32]:17 ff One side of the moon is white with a dark sky and tall mountains, whilst the dark side of the moon is dark with a light sky and deep valleys.[32]:40 Although home to spiders, the main enemy on the moon is the White Dragon (later renamed the Mottled Monster).[32]:34-6