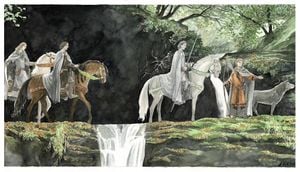 In F.A. 502, some time after Túrin's tragic death, Húrin, Túrin's father and now an old man, was allowed to enter Menegroth, where in anger he threw the Nauglamír, the treasure of Nargothrond before King Thingol and "thanked" him for aiding his son. Melian pierced through Húrin's madness and grief; shamed by his actions, he offered the Nauglamír to Thingol sincerely and left Menegroth a broken man.[8] 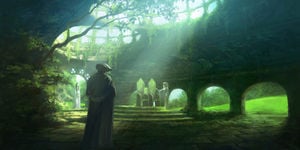 Ruins of Doriath by Pete Amachree

Artanor ("The Land Beyond") was in early versions of the legendarium the name for what was later called Doriath.[14]