"In Beleriand King Thingol upon his throne was as the lords of the Maiar, whose power is at rest, whose joy is as an air that they breathe in all their days, whose thought flows in a tide untroubled from the heights to the deeps."
― Quenta Silmarillion, "Of the Sindar"

Thingol, also known as Elu, was one of the two kings of the Teleri, the other being his younger[4] brother Olwë. He was also the King of Doriath and the greatest lord of the Sindar. Known as Elwë during the first years of the Eldar, he was the older brother of Olwë and Elmo. He was also a good friend of Finwë, King of the Noldor. His hair was silver and he was the tallest of all Elves and Men.[3] As the de facto "Lord of Beleriand," Thingol would become a central figure of the First Age, instigating the Quest for the Silmaril, the greatest victory of the Age, but ultimately the cause of his own doom.

Thingol was born at Cuiviénen in the days before the Sun and the Moon, when Middle-earth was lit only by starlight.

After the Chaining of Melkor, the Vala Oromë took three Elves, Ingwë, Finwë, and Elwë, to Valinor to convince the Elves to join the Valar in the Blessed Realm. Upon their return, the Elven ambassadors convinced many to join them on the Great Journey to the West. During the thousand mile journey, the Elven host separated into three groups, the Vanyar, the Noldor, and the Teleri.[5]

The Teleri were the largest folk and they were divided in two hosts, led by Elwë and his brother Olwë. Elwë was more eager than his brother to see again Valinor, and wished to catch up with the Noldor because of his friendship with Finwe; but the Teleri were also the slowest and were the last to reach the western shores of Middle-earth.[5] 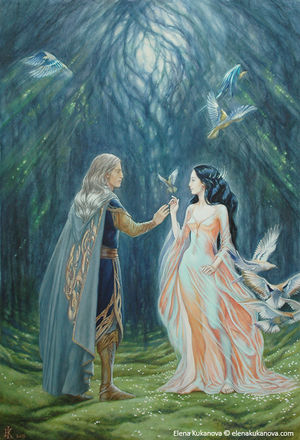 After many years the Teleri crossed the Blue Mountains and stayed for some time in East Beleriand.[5] During this time Elwë returned from a meeting with his friend Finwë, and wandered into the Forest of Nan Elmoth, where he met and fell in love with Melian the Maia. Caught in an enchantment of their own making, Elwë and Melian could not be found by the searching Teleri. When the Valar returned to take the remaining Elves to Valinor, only some of them followed Olwë across the Great Sea. The rest had come to love the lands of Beleriand and refused to leave without their missing lord.[6]

Over two hundred years passed before Elwë appeared again with his bride Melian, much changed since when last they saw him. While he had been fair and noble before, he now stood like a Maia above them as the tallest of the Children of Ilúvatar. He gathered his people together and founded the Kingdom of Doriath. His subjects would become the Sindar, or the "Grey Elves", and their language was Sindarin. From then on Elwë was known as King Elu Thingol, and he claimed lordship over all the lands in Beleriand. While Thingol was king of the Grey Elves, he saw the light of the Two Trees as an ambassador of the Valar and thus he was counted as a High Elf, and equal to any lord of the Eldar.[7][3] He was even acknowledged as high-king of all the Teleri in Beleriand, even after Doriath became hidden.[4]

On Melian's advice, Thingol became an ally of the Dwarves of Belegost, who carved the caverns of Menegroth for him. In payment he gave them, along with many other things, the great pearl Nimphelos.[7]

A thousand years before the first rising of the Sun and the Moon the Green-elves entered Beleriand under Denethor. Thingol welcomed them and gave them the lands of Ossiriand, which they named Lindon. The Green Elves told of the spread of the Orcs and other foul creatures in the north and east of Middle-earth. The Grey Elves began arming themselves.[7]

Centuries later Melkor returned to Middle-earth. Now named Morgoth, he had destroyed the Two Trees, killed Finwë, the King of the Noldor, and stolen the fabled Silmarils. Seeking to claim dominion quickly, he launched a sudden assault on the lands of the Sindar. The First Battle of Beleriand went well for Thingol, who prevented any Orcs from invading Doriath, but the Green Elves took horrific losses and the Falathrim were besieged.[7]

The Falathrim were finally saved by the unexpected arrival of the Noldor, who launched the Dagor-nuin-Giliath ("Battle Under the Stars") in which Morgoth's forces were all but annihilated.[8] 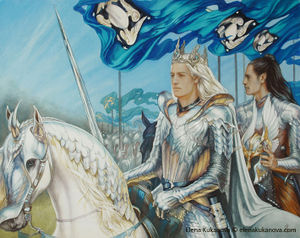 After the First Battle of Beleriand, Doriath was encircled by the Girdle of Melian, an impenetrable fence of enchantment that guarded the kingdom.[7] While his own kingdom was protected, Thingol was still loath to surrender any other lands in Beleriand to the Noldor as he was suspicious of the aggressive new lords in Middle-earth.[8]

King Thingol's relations with the Noldor were strained, and grew worse decades later when he learned the truth of the Kinslaying at Alqualondë. Thingol banned the use of Quenya in his lands, which led to Sindarin being the common Elven tongue in Middle-earth. The King of Doriath refused to aid the Noldor in the war against Morgoth, and took little part in the ongoing struggle.[9] 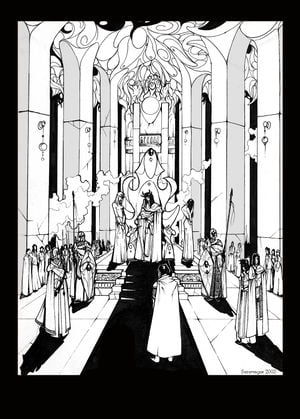 Thingol and Melian had one child, a daughter named Lúthien, said to be the fairest woman ever to live. Lúthien fell in love with a Man named Beren. Thingol did not wish for the two to wed, as he valued his daughter very highly and disliked Men. As a bride-price he asked for a Silmaril from the crown of Morgoth, thinking there was no way that Beren could fulfill this demand.[10]

However, when Beren and Lúthien came back from Angband, and when Beren showed him his missing hand which still held the Silmaril in the belly of Carcharoth, he softened his heart towards him. Soon, though, Carcharoth in his anguish and rage from the Silmaril that burned his insides, broke through the Girdle of Melian and entered Doriath. In that hour, Thingol, along with Beren, Mablung, Beleg and Huan the Hound of Valinor, began the Hunting of the Wolf. Carcharoth was finally slain by Huan, but both Huan and Beren died in the process. After that, Lúthien died also, and coming to the Halls of Mandos she begged Mandos that Beren be returned to life. However, it was beyond the power of Mandos to withhold the souls of Men from going beyond the Circles of the World.[10]

Therefore, Ilúvatar, through Manwë, offered Lúthien and Beren the opportunity to live again, but with Lúthien sharing the Gift of Men. She agreed, and they both came back to life and lived out the remainder of their second lives at Tol Galen, far from the sight of any other mortals.[10]

Thingol adopted as a son a young Man named Túrin, son of Húrin and akin to Beren himself, who was sent to Doriath when he was seven years old.[11] When he grew up, he was permitted to join Beleg Cúthalion on the marches of Doriath, fighting the Orcs of Morgoth.[12][13]

Túrin accidentally caused the death of Saeros, one of Thingol's counselors who had provoked and attacked him. Before he could be either punished or forgiven he fled. Thingol however gave Beleg a leave to seek out his friend, who in the meantime had joined a band of outlaws.[14] Telling to Thingol that Túrin did not wish to return, Thingol allowed Beleg to go and join his friend and gave him the black sword Anglachel that Eöl had forged and given to Thingol[15] in tribute.[12] 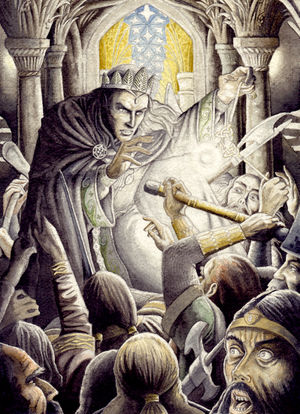 Some time after Túrin's tragic death, Húrin, now an old man released from Morgoth's captivity, was allowed to enter Menegroth. In anger he threw the Nauglamír, the treasure of Nargothrond, before King Thingol, bitterly "thanking" him for aiding his son. Melian pierced through Húrin's madness and grief; shamed by his actions, he offered the Nauglamír to Thingol sincerely and left Menegroth a broken man.[16]

Elwë Þindicollo or Sindicollo was the ancient name of King Thingol; when he settled in Doriath with Melian, he took the Sindarin form of his name, Elu Thingol.