(Redirected from Kingdom of Lindon)
Lindon

"...the last whose realm was fair and free
between the Mountains and the Sea."
― The Fall of Gil-galad

Lindon was a region of the Westlands. Initially populated by Laiquendi in the Elder Days, it became an important Elvish realm in the following Ages, known for its havens and ships that would sail for the West.

Lindon was a name of Ossiriand, a region west of the Blue Mountains, in East Beleriand. After the deluge of Beleriand in the War of Wrath, Lindon became the westernmost land of the continent of Middle-earth.

The regions of Forlindon and Harlindon were the chief parts of Lindon, which extended, north of the Gulf of Lune, to include the lands east of the Blue Mountains and west of the River Lune as far as the inflow of the Little Lune (beyond that was Dwarf territory).[note 1][2][3] South of the Lune it had no clear bounds, but the Tower Hills (as they were later called) were maintained as an outpost.[4]

When Ar-Pharazôn captured Sauron and took him to Númenor, the Westlands found peace, and Gil-galad was free to extend his power and influence so that the Elves of Lindon controlled most of the Westlands, even to the borders of Greenwood the Great, until the Downfall of Númenor, when Sauron returned to Middle-earth.[5]

In the tumult following the Downfall of Númenor, Lindon suffered great loss as "the sea rode in upon the land", and therefore had shrunk by the end of the Second Age.[6]

The name Lindon was first used by the exiled Noldor for the region of Ossiriand.[7]

Lindon was the only part of Beleriand that survived the War of Wrath, the rest of the land having been broken or submerged by the tumults.[8] However, Belegaer the Great Sea broke through the mountain chain, creating the Gulf of Lhûn. 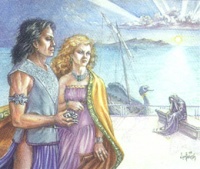 In S.A. 1, the Elves built the Grey Havens in the newly-formed Gulf of Lune where the Eldar sailed the Straight Road, but most of them were unwilling at first to forsake the lands they fought in and preferred to linger there. This was the foundation of Lindon. Gil-galad was the last heir of the kings of the Noldor in exile, and acknowledged as High King of the Elves of the West and so, he was the king in Lindon.[5][1]

In the beginning of the Second Age, most of the Noldor that remained in Middle-earth dwelt in Lindon but, many Teleri, survivors of Doriath and Ossiriand, left Lindon before S.A. 1000 to establish realms among the Silvan Elves.[5] Galadriel and Celeborn brought many Noldor, Sindar, and Green-elves out of Lindon into Eriador to dwell there for some time.[9] Many of the Noldor in Lindon lead by Celebrimbor established the realm of Eregion in S.A. 750 near the West-gate of Khazad-Dûm due to the recent discovery of mithril in Khazad-Dûm.[1]

In S.A. 600, Entulessë, a ship from Númenor arrived in Mithlond where Gil-galad welcomed the Númenóreans, before reestablishing contact with their Mannish kin, the Middle Men.[10][11]

A fair being calling himself Annatar, an emissary of the Valar, came seeking entrance. Gil-galad and Master Elrond sensed that he was not what he seemed, and denied him. Messengers were sent from Lindon with warnings; but they were unheeded, and Annatar was received gladly, mostly in Eregion. However, Gil-galad and Elrond were proven correct, as Annatar was indeed Sauron and later, there was war in Eriador.[5] Elrond led the forces of Lindon to battle to defend Eregion. With them, and other Elves who fled the destruction of Eregion, he established Imladris in S.A. 1697.[1]

The Elves called that time Days of Flight as many fled to Lindon and thence over the Sea to the Uttermost West. But in Lindon Gil-galad still maintained his power, and Sauron dared not as yet to pass the Ered Luin nor to assail the Havens; and Gil-galad was aided by the Númenóreans. In the Dark Years, Sauron had conquered most of the Westlands, but in S.A. 1700 Tar-Minastir sent a fleet to Lindon and the combined army of Lindon and Númenor drove Sauron's forces out of Eriador.[1][5] 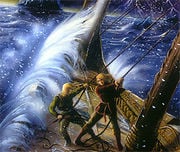 After the fall of Gil-galad (during the time of the Kings of Arnor), there was still a remnant of his people, the Noldor, who dwelt at the Grey Havens of further inland in Lindon, who, aside from Rivendell, were most of the remaining Noldor of Middle-earth. Cirdan remained the Lord of the Havens and ruled Lindon from the Grey Havens.[3][5]

During the Third Age, Lindon supported Arnor in the Angmar War. It assisted Arveleg I and Cardolan drive off the Hill-men from the Weather Hills. Later, with Círdan's help, Arveleg's young son, Araphor, drove Angmar's armies from Fornost and the North Downs. Combining forces with Rivendell, and the Galadhrim who joined them from beyond the Misty Mountains, they subdued Angmar for some time.[3] Lindon also assisted King Araval in a coalition with Rivendell, in another battle against Angmar in T.A. 1851.[12] In T.A. 1975, Elves from Lindon brought a ship to Forochel to rescue Arvedui Last-king. The crew endured a perilous journey, but Arvedui rashly attempted to return that winter, and all aboard perished. The next year, the forces of Lindon joined the Host of the West, and Cirdan led them to victory in the Battle of Fornost.[3][13]

In a post-LotR writing, J.R.R. Tolkien says that the name Lindon was coined by the Green-elves, derived from Nandorin(?) *Lindānā. The Sindar called the country Dor Lindon and the Noldor Lindóne (or Lindónë[14]) but both also adopted the name Lindon.[15]

The translation "Land of the singers", conceived to be a name in the Ossiriandic tongue, has been suggested by David Salo, Arden Smith, Patrick Wynne, et al. in their linguistic contribution to Arnor: The Land

In early versions of the The Lord of the Rings Appendices, Gil-galad is said to have founded Lindon in S.A. 10.[18]

A supplement on Lindon was never released by ICE, although there were such plans,[19] and Jeff J. Erwin and Oliver Schick were commissioned to write supplements on Lindon and Mithlond, respectively (both supplements were nearly finished at the time ICE lost their license from Tolkien Enterprises).[20] However, scattered information on Lindon and its prominent individuals can be found in several supplements.[21][22][23][24]