Elros was the son of Eärendil, the great hero of the First Age, and his wife Elwing. He was the twin brother of Elrond and both were Half-elven.[3] Choosing to live as a mortal Man, he became a lord of the Edain and the first King of Númenor, taking the name Tar-Minyatur.

Elros and Elrond were born in the Havens of Sirion during the darkest days of the First Age, when the forces of Morgoth controlled most of Beleriand. When the twins were just six years old, the Sons of Fëanor, bound by their Oath, assaulted the Havens in the Third Kinslaying since they desired the Silmaril on the Nauglamír held by Elwing. Eärendil was at sea, and Elwing escaped with the Nauglamír and jumped into the sea.[3] Maedhros and Maglor, the only Sons of Fëanor to survive the assault upon the Havens, took Elros and Elrond as captives[3] and abandoned them in a cave with a fall of water over the entrance instead of killing them.[4] But Maglor took pity upon Elrond and Elros and rescued them and a mutual love grew between Maglor and the young twins afterwards.[3] Elros was given the name "Elf of the spray" or "star-foam" (see Etymology), because Elros was found playing in the water of the waterfall.[4] 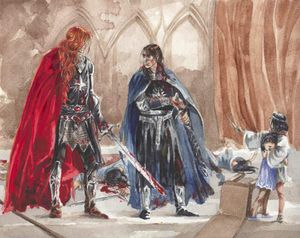 And Maglor took pity upon them by Catherine Karina Chmiel

After the War of Wrath and the destruction of Beleriand, the Valar gave the twin Peredhil the choice over their race and fate. Elros chose the Gift of Men,[3] but still, he was blessed with a life longer than any other mortal Man's.

In the first years of the Second Age, the Valar had prepared for the Edain, as a reward for their struggle against Morgoth, a large island in the western part of the Great Sea. Now by right a lord of the Edain[note 1], Elros led his people across the sea, guided by the Star of Eärendil his father, to the island. For this the island was called Elenna meaning "starwards", and was the closest of mortal lands to the Blessed Realm, though Men were forbidden to go so far westward that the coasts of Elenna were no longer visible. The Valar also gave the Edain substantially longer lifespans than those of Men remaining in Middle-earth, and Elros and his descendants had the longest lives of all the people.[5]

Elros founded the realm of Númenor and became its first King in the year 32 of the Second Age. He took a royal name in Quenya, Tar-Minyatur, thus setting a tradition for the kings of Númenor to take a royal name in Quenya.[2] He brought with him the Ring of Barahir, the Axe of Tuor, the Bow of Bregor and Thingol's sword Aranrúth as family heirlooms.[6]

The city of Armenelos including the tower and the citadel were constructed during the reign of Elros.[5]

Elros had four children: three sons, Vardamir Nólimon, Manwendil, and Atanalcar; and one daughter, Tindómiel.[7][note 2] After living five centuries, and ruling Númenor for 410 years, Elros died and his son Vardamir Nólimon took up the Sceptre of Númenor as Tar-Vardamir. But because Elros had lived so long, Tar-Vardamir was already old, and was thus only a titular King: he immediately surrendered the Sceptre to his son, Tar-Amandil.[2]

In a letter from 1958 J.R.R. Tolkien explained that Elros is a Sindarin name that he was given, because he was found playing in the water of a waterfall that fell over the entrance to a cave and that the name is a compound of eld>ell, the Sindarin term for the High-Elven exiles, and ros based on primitive Elvish rossē meaning "dew, spray (of fall or fountain)".[4] In an essay that was probably written between 1959 and 1960 J.R.R. Tolkien translated the name as "Star-glitter".[8] In an excursus on the names of Finwë's descendants that was written in 1968 or later J.R.R. Tolkien translated the name as "star-foam".[9][10] The Sindarin elements are el ("star") and ros ("foam").[11] In an essay on "The Problem of Ros" that was written in 1969 or later J.R.R. Tolkien considered the possibility that ros was a Bëorian word for "foam" and for the "white crest of waves", but he rejected this idea, because of the Sindarin name Cair Andros.[12]

The Quenya form of Elros was Elerossë.[9]

After Elros ascended the throne of Númenor he was known by the Quenya title, Tar-Minyatur in the Scroll of Kings.[13] Tar-Minyatur means "High first-ruler" in Quenya[14], consisting of tar ("high") + minya ("first") + tur ("master, lord").[15] All the Kings and Queens after Elros also used the prefix Tar- in their royal titles in the Scroll of Kings.[16]

In early versions of the legendarium, Elros' Adûnaic name was Indilzar,[17] which was changed to Gimilzôr. However, in later versions of the Númenórean tale (Ar-)Gimilzôr was the name of the twenty-third King of Númenor.[18] 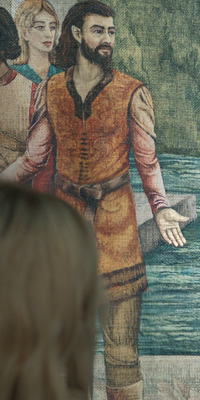 Elros Tar-Minyatur in The Lord of the Rings: The Rings of Power

Elros Tar-Minyatur is depicted alongside his twin brother Elrond on a tapestry within Númenor's Hall of Lore, which Elros himself had allegedly built.