(Redirected from Lord of Eregion)

"In Eregion the craftsmen of the Gwaith-i-Mírdain, the People of the Jewel-smiths, surpassed in cunning all that have ever wrought, save only Fëanor himself; and indeed greatest in skill among them was Celebrimbor, son of Curufin [...]"
― The Silmarillion, "Of the Rings of Power and the Third Age"

Celebrimbor was the son of Curufin,[1] the fourth son of Fëanor,[2][3][4] and thus a descendant of Fëanor[5][6]. Aside from his grandfather, Celebrimbor was the greatest craftsman in the history of Middle-earth, and his forging of the Rings of Power led to the dominion and eventual downfall of Sauron in the War of the Ring. 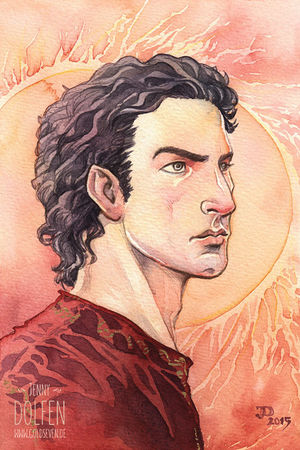 The early years of Celebrimbor are not known, but he was born in Valinor and followed his father and grandfather into the Exile of the Noldor in Middle-earth. His mother stayed behind.[1]

After the Sack of Nargothrond, Celebrimbor lived for a time in Gondolin, where he was a jewelsmith for King Turgon. Perhaps, he was taught this art by Enerdhil, the master jewelsmith. In Gondolin the first Elfstone had been created, either by Enerdhil or by Celebrimbor.[7] He survived the Fall of Gondolin and most likely fled to the Mouths of Sirion with the other refugees led by Tuor, and thence to Balar.

A legend says that during the Second Age Celebrimbor was in love with Galadriel who was pained at the state of Middle-earth. Celebrimbor remade another version of the Elessar at her behest, but it was with less power than the original.[7]

During the Second Age, he was lord of the elves of Ost-in-Edhil in Eregion. He was also the head of the Gwaith-i-Mírdain, a guild of elven craftsmen. Their skill was so renowned that they gained the admiration and friendship of the Dwarves of Khazad-dûm. Together with the dwarf Narvi, Celebrimbor crafted the Doors of Durin that guarded the West-gate of the Dwarven kingdom.[8] 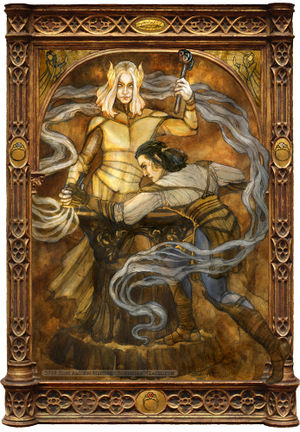 Annatar and Celebrimbor by Soni Alcorn-Hender

At around S.A. 1200 Sauron, calling himself Annatar (the "Lord of Gifts") and claiming to be an emissary of the Valar, arrived in Ost-in-Edhil, and offered his knowledge to the Gwaith-i-Mírdain.[9]

Under the guidance and instruction of Annatar, Celebrimbor and the Gwaith-i-Mírdain made several lesser rings, before embarking on the project to make the Rings of Power. A legend says that Celebrimbor gave one of those rings to King Durin III who reigned in Khazad-dûm.[10]

Fight against Sauron and death[edit]

Sauron retaliated by attacking Eregion in S.A. 1695, laying waste to the realm. In the Sack of Eregion, the nine were taken and Celebrimbor was forced under torture to disclose where the seven were held, but he would not reveal the whereabouts of the three elvish rings. Sauron captured the other rings and used them as instruments of evil in later years, particularly against Men. 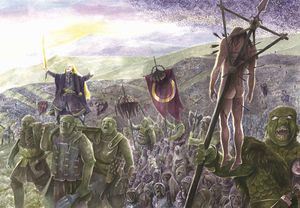 Death of Celebrimbor by Abe Papakhian

Celebrimbor died from his torment in S.A. 1697,[11] the last direct descendant of the line of Fëanor, with the possible exception of Maglor. His body, shot with arrows, was hung upon a pole and carried by the forces of Sauron as a banner as they assaulted the Elves.[12]

In the versions (described below) in which he has a Telerin origin, is stated that Celebrimbor is the Sindarized form of Telperimpar, with the Quenya form Tyelpinquar.[1]

Celebrimbor was invented for the back-story of The Lord of the Rings with no background in the first edition (before 1966); afterwards Tolkien attempted to write a background to link him with the Elder Days: in a passage concerning Galadriel and Celeborn he was described as a Noldo survivor of Gondolin, who had been one of Turgon's greatest artificers. He was prideful and had an almost "dwarvish" obsession with crafts, survived the Fall and later became a follower of Celeborn and Galadriel. However, in a note Tolkien put next to the text, he wrote, "it would be better 'to make him a descendant of Fëanor'."

Thus, an appropriate line is added in the Appendix B of the second edition. Tolkien then proceeded to decide which of Fëanor's sons would result to Celebrimbor; a note describes their wives and children, stating that, Maglor, Caranthir and Curufin were wedded, concluding that "Curufin, dearest to his father and chief inheritor of his father's skills, [...] had a son who came with him into exile, though his wife (unnamed) did not."[1] Christopher Tolkien used this note as a basis for The Silmarillion,[1] where Celebrimbor is the son of Curufin who remained in Nargothrond when his father was expelled[14][10].

However, apparently forgetting the published statement, Tolkien explored other ideas; in an essay dated 1968 Celebrimbor is referred to as a Telerin silver-smith who followed Celeborn to Middle-earth, and ended up in Eregion, being fascinated by the silver-like mithril.[1] In "Of Dwarves and Men" (1969 or later) he mentions that he was a Sinda and descendant of Daeron of Doriath who continued to use his runic script in Eregion.[15]:297[1]

Celebrimbor will be portrayed by Charles Edwards as one of the central characters of the series.[16] 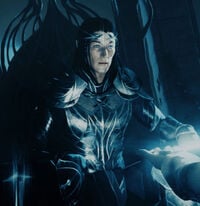 Celebrimbor plays a major role in the video game, serving as a wraith who is bound to an undead Gondorian Ranger, Talion, by the will of Sauron. He is voiced by Alister Duncan. He is also the main protagonist of the Bright Lord expansion, where he is revealed to have stolen the One Ring from Sauron at some point in the Second Age, and intended to use it to turn the Dark Lord's own weapons against him. However, he is corrupted by the power of the Ring and doomed to never see the Undying Lands. Though he defeats Sauron in battle, Sauron still managed to reclaim the Ring and banish Celebrimbor's spirit to an eternity as a wraith in the Unseen world. Bound to Talion, Celebrimbor grants him Elven powers to help him seek revenge for the death of his wife and son.

Celebrimbor uses Talion to create a new ring of power so they can dominate the orc forces of Sauron's army to create one in their own service. With their army amassed they travel Sauron's Road to destroy the Dark Lord. On their way, Talion comes up against the Nazgûl Isildur and decides to free Isildur from life as a servant to Sauron. Celebrimbor, angry that Talion vanquished Isildur rather than adding his power to their army, reveals that he intends to replace Sauron instead of destroying him. Talion refuses to help him in his quest for power, so Celebrimbor removes the new ring from him. With their bond lost, Talion begins to bleed profusely and die. Celebrimbor convinces Eltariel, an Elven assassin of Galadriel, to wield the new ring and continue on to defeat Sauron. During their battle, Sauron is able to overpower them and cut Eltariel's fingers off along with the new ring. Sauron then absorbs Celebrimbor and together they become the flaming Eye of Sauron atop Barad-dûr.