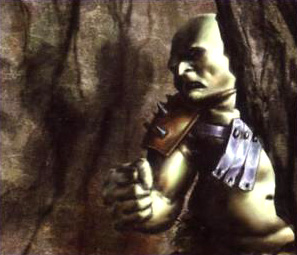 "Yes, I am afraid trolls do behave like that, even those with only one head each."
― Roast Mutton

Two-headed Trolls might have been a legendary race of Trolls, whose possible existence is fleetingly suggested in a chronicle of the Quest of Erebor, commenting on William wiping his lips on his sleeve.[1]

If this statement was not merely a way of speaking, perhaps there were indeed Trolls in Middle-earth that, unlike the Stone-trolls, had at least two heads and behaved even worse.

Commenting on the above remark, John D. Rateliff has noted that trolls "with multiple heads appear in many stories", especially pointing to George Webbe Dasent's "Soria Moria Castle".[2]

C.S. Lewis mentioned the Ettins of Ettinsmoor in Narnia, some of which have two heads.[3] In many later fantasy settings, but also some adaptations of Middle-earth, there are two-headed monsters, which usually are called "ettens" (q.v.).

An individual monster called Skessa, a cross-breed between a troll and giant, having two heads.[4]

"'Two-headed' Troll" is a Warrior Ally for evil players.

Ettins, a race of two-headed trolls, was intended to be included in the game.[5]

Ettens resemble the Hill-trolls, but they possess "not one but two long heads". The solitary creatures, a result of an ancient experiment by Morgoth, live almost exclusively in the Ettenmoors.[6]

The Overlord of the Núrnen region of Mordor is an Olog named Ranger, who poses as a Troll with two heads. In reality, the second head is that of the Uruk Ratbag the Coward, who is riding on Ranger's back and wearing a large helmet to conceal his identity.

Two-headed Trolls are among the evil creatures of Gundabad and can be found among the Grey Mountains.